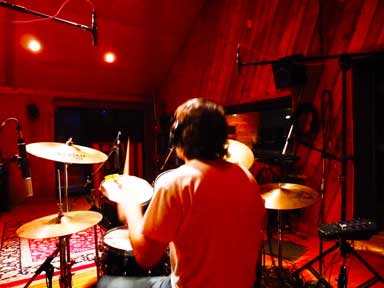 We put together a few play-along rock drum tracks for you rockers, some powerful backing tracks using modern metal drums for the metalheads, and some funky goodness for basically everyone. There’s something, musically-speaking, for everyone here on this page.

The best way to improve on your instrument is actually pretty simple: just play! And, while playing to a metronome is a “must” to establish your sense of time, there’s an even better way to improve your time – play along with an actual human drummer. So, if you need to get in your practice and, more important, have some fun, it’s time to play along with some live drums. Try out new riffs, chord patterns, arpeggios, and more – the only limit on what you can do with these play-along tracks is your imagination.

We’ll get you jamming along with some of the best guitar backing tracks around for blues, rock, metal, funk, jazz, and many other styles. These inspiring drum backing tracks offer different musical styles as well as tempos and feel to get everyone ready for different musical situations, whether you’re a pro or a beginner. We’ve made it easy for you to just play-along with some 100% live, acoustic drums, no programming MIDI drum tracks or assembling a groove from loops required. Just hit “play” and get inspired!

Use these drum backing tracks for playing, jamming and practicing – just press play!

But, wait, I am not a guitar player! Can I still play along with these backing tracks? Of course! Whether your instrument is the bass, keyboards, or anything else, you can still groove along to the feel of a live drummer in these backing tracks. There’s no better way to improve your technique overall. As you work on new patterns, runs, scale, or exercises, you’ll learn to lock in with the feel of a professional drummer. Let’s face it, it’s time to grab your bass and get better playing. Whether you want to challenge and improve your creativity or get comfortable with different scales and modes, get better today and have fun doing it.

Want to create your own drum backing tracks? Forget the MIDI tracks and jam with real drums. It’s easy if you use what we used to create the tracks below. Start with the best drum loops. And, then get back to practicing and getting better.

All drums are 100% live and acoustic, never quantized. No over-processed, edited-to-death loops like you’re finding elsewhere.

Grab your weapon of choice (guitar, bass, keyboard) and enjoy the grooves!

It’s time to get funky with this 70 bpm funk play-along track. This track was built upon the foundation of a tight funk loop found in Rock Hard Funk I funk drum loops . It’s a spacious and relaxed groove that will definitely inspire new songwriting ideas or, at the very least, give musicians a funky human feel to jam with instead of a dull metronome.

This 70 bpm tempo funk drum track has a bit of shuffley-swing to it as well as some intricate hi-hat work. Dig into the plentiful space – should be a meaty grooves for guitarists, bassist, and more. This groove lays down a hard funk groove for nearly four minutes and is punctuated with a distinctive drum fill at the end.

This 16th note beat delivers a solid rock drum backing track, a great groove to jam along with and to inspire new songwriting ideas. This 90 bpm tempo groove rock drum beat was taken from one of our best-selling rock drums sample libraries Drum Werks IX. It’s relatively laid-back and offers plenty of space for creative guitar or bass players, but it definitely has enough drive for anyone who really wants to rock out. Being at 90 bpm, it’s a great grooving tempo. It’s not too fast and it’s not too slow – it’s right there in what we like to call the “groove zone.”

After a prototyical rock intro fill, this groove sinks in for a full three minutes and is punctuated with a distinctive drum fill at the end. This staple rock beat should serve many musical songwriting styles well and offers a musical way to practice or experiment with new song ideas instead of a monotonous click track. Grab hundreds of rock beats like this one for yourself from Drum Werks IX and see what else you can do to keep rocking.

Unlike 95% of metal drum tracks uploaded to YouTube to play along with, this 100 bpm groove is actually played by a live drummer. And, it’s a beast. You can sit and program MIDI drums all day or you can just hit play; we think that choice is easy.

After an initial blast run to kick off this metal play-along, the groove will grind away with enough brutal pocket to inspire any number of powerful riffs. We choose to intersperse the open space of the main groove with the blasts to keep things interesting. So, if you like shifting gears as you work out new metal songwriting ideas, this accompaniment track will definitely get the creativity flowing.

You’ve got nearly four minutes to lock in, explore new ideas, or just grind away. It’s up to you. Work on your rhythm playing, or download the audio and lay down down your own chord progression to work out guitar solo ideas.And, if you like what you’re hearing on this play-along track, how much better would it be to have hundreds of different grooves to play along with? That’s easy, too – check out the full range of metal drum loops and samples from Double Bass Mania VII and see what else you can create with many more groove styles, tempos and rhythms. Basically, this is the tip of the iceberg if you want more of these modern metal drum samples in your music.

There’s no better way to expand your playing vocabulary or improvisation skills than to hit play and see what happens as you explore this metal jam track. Your guitar playing will thank you. Have fun – share any riffs, recordings that result from having a go with these.

We’re getting back to 90 bpm again for this funky play-along. It’s time to get funky with this 90 bpm funk drum loop that locks in it for over five minutes. It’s a hypnotic groove sure to inspire new songwriting ideas or offer an engaging practice session without the soulless clanging of a lifeless metronome. This 90 bpm tempo funk drum track has some serious pocket and swing, with plenty of syncopation to keep the groove interesting and dynamic. Lock in to the “count in” and off you go.

And, while this deliciously wicked funk groove can also be found on Rock Hard Funk I, did you know there are literally thousands more with the same funky attitude but many more diverse feels and tempos where it came from? It’s a jam-packed non-stop funk-athon on Rock Hard Funk I, so we highly recommend you give the entire sample library a look.

A truly funky groove for guitarists, bassists, and other instrumentalists. Just kick back, press play, and groove along for five minutes. Be sure to catch the ending drum fill if you like to hit a full stop at the end of your jam.

Nothing is better to rock out to than Led Zeppelin and John Bonham (who basically wrote the rule book for rock drummers!). And, who doesn’t love the groove to the legendary Led Zeppelin song “Rock and Roll”? Everyone knows the second track from the band’s fourth album released in 1971, right?!

This play-along is only a minute long, but includes the famous intro, main verse groove and iconic “big rock ending” the song is famous for. Yeah, we know it’s short and it’s far from the entire tune, but you can get the full drum track, as well as individual loops for all the song’s sections (intro, verse, chorus, bridge, outro) on a collection of rock drum tracks and loops we call Drum Werks XVII. It’s got the authentic vibe and attitude of Led Zep  and AC/DC grooves covered as well as a few iconic rock drum songs from Toto, Hendrix, and Van Halen as well.

Have fun jamming along with our take of the well-known track “Rock and Roll” from a drummer who’s actually played with members of Led Zeppelin!

Straight-ahead, ready to groove, this rock play-along track is ideal for guitarists who want to work out new riff ideas.It’s got a lead-in fill that goes right into a heavy rock beat. Then, to break things up a bit, it goes into a tom beat that is meaty and thick with a strong backbeat throughout this section. And, once you think it’s over, it goes into a ride cymbal section to inspire some different musical ideas and phrasings. It’s short and to the point, more of a sketchpad for musical ideas than anything else.

But, if you’re looking for the rock drum loops that inspire this backing track, then you need to check out what Drum Werks XXVII: Groove Rock. Straight-ahead, hard-hitting songwriting drum tools inspired by some of rock’s greatest drumming performances and played by one of the best studio drummers in L.A.

More play-along drum tracks can be found on the Beta Monkey YouTube channel.