Get to Know: Simon Reich

Simon Reich is an award-winning pianist and composer from Victoria, Australia. Despite a later start than most, he turned music into a full-time profession. He shares his insight and work as a long-time Beta Monkey user. 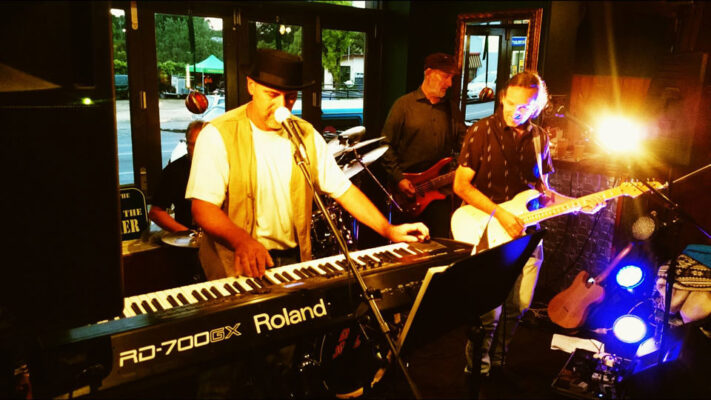 Simon Reich began composing music in his teenage years, but in most cases, were improvisations that ended up being remembered for a few days or forgotten forever. Simon went on to play in bands all his life, bouncing off live musicians & crowds, to eventually arrive at the skills he now has today.

With the advent of computer based home recording studios, he set about capturing the improvisations & compositions knocking around inside his head. Being a multi-instrumentalist, has allowed Simon to cover all the bases of his recording & even though he has a rudimentary ability on drums, he realized the basis of any track with a groove, was good, live drumming.

That’s where Beta Monkey drum loops became an integral part of Simon’s arsenal of sounds from the very beginning. He knew drum machines, rhythm midi tracks & poorly sampled drum loops weren’t going to cut it. After searching the internet, it seemed that the glowing reports of Beta Monkey samples were what he was after. Another plus, was the wide variety of styles covered in their libraries & seeing as though Simon plays so many different genres, BM drum loops were the obvious choice.

Having started on Soundcloud in late 2012, an opportunity to test his compositional skills presented itself immediately when Beta Monkey announced a songwriting competition. A new “Hybrid Funk” disk was being released & as a precursor, BM called for submissions to their site. Simon decided to enter, using it like a brief from a potential client & was selected 3rd place-getter.

This started a range of competitions Simon began to enter, as a means of gauging his compositional skills.

Here is a list of successes with his submissions.

1. The Smithsonian Institute, in the US, released various samples from their vaults to be remixed / used in musical compositions. Simon took out the “People’s choice” award for his track “Deep Forest”, which is an ambient track using lots of bird & insect samples & only a light instrumentation as accompaniment.

2. GW Scores (USA) regularly calls for submissions to it’s “Scoring & Orchestration Challenges”. Simon has been chosen in 3 of the challenges so far. The movie clips are supplied without any sound & composers are called on to submit their take on how the scene will be enhanced by music & sound effects.Beta Monkey single hit samples were used whenever percussion or drum hits were needed. So the BM disks, apart from being great loops, can also be used as a sound library, for countless projects, such as these:

https://www.youtube.com/watch?v=69cjZyqD7HM&list=PLkWlzMQJKb8Pisg7OACpDD6RjD938cB-b&index=2 Simon’s entry is at 14:26

https://www.youtube.com/watch?v=VUqCbSynTE8&list=PLkWlzMQJKb8Pisg7OACpDD6RjD938cB-b&index=6 Simon’s entry is at 6:30

https://www.youtube.com/watch?v=-qs2NRyuFsk Simon’s entry is at 7:54

3.The University of Western Australia uses Simon’s tunes in “Emotional response to music”, experiments. Here is one of the tunes they feature.

4. Simon doesn’t like to “pigeon holed” in a specific genre, so spreads himself across a wide range of music styles. A visit to his Soundcloud page will show that his styles include rock, funk, ambient, jazz, blues, prog. rock, piano, classical, soundtrack, chill, pop, country & probably styles that are an amalgamation of all of the above. Some of his recent Soundcloud achievements have included:

Over 200,000 total plays, 959 followers & 52,000 plays on his currently most popular track. Simon has also been on the Soundcloud “Explore” piano section a number of times & his highest ranking on this section was No#4 in the world. His most recent collaboration with Fivos Valachis (23,000 at the time of this article) will be featured on a Christmas album to raise money for “Doctor’s without borders”. His track “Monkey on my back”, a piano based blues track, is currently #21 on the “Explore” Blues chart on Soundcloud. Simon has been able to complete a full circle, with some of his childhood idols now following him on Soundcloud, including members from “Crowded House”, various well respected Australian bands, winners of Australian Idol & Australia’s Got Talent programs & musicians / composers of high esteem from around the globe.

5. Simon’s piano tunes are regularly chosen in monthly showcases of a group of highly esteemed musicians across the world called “The Piano Cloud”.

7. A Blues piano track entitled “Jumpin’ Joint”, has also been released as a single. It uses Beta Monkey loops as the drum track & then some raucous piano playing. That’s the only 2 instruments on the track.

Probably the best way to describe how Beta Monkey loops are used in Simon’s songwriting, we’ll turn it over to him to tell us how he goes about a typical musical project.

“I usually have an idea of the rough direction of how the track should go & possibly even how I want the drum groove to sound. I then start trolling through my BM loops & find something in that ballpark. I set the BPM & then get out the bass to lay down a line. Depending on whether it’s going to be a keyboard or guitar based track, determines the next instrument I add. It’s now that the fun begins! In fact a tune will begin to write itself at this point, as each added track influences how the sound, groove & direction heads. In fact the early idea I may have thought the project would head, can often be thrown out altogether, as the amalgamation of all the tracks begins to dictate a new, unthought of directions.

I always, around this point, mix down a rough version to put onto my Ipod & listen to it on my headphones while out of the studio, or in my car stereo. If I only confine myself to my high end monitors, I won’t pick up mistakes on sounds that just aren’t “cutting it”. It’s also when I come up with great riffs or ideas, driving in my vehicle. If I think of a fantastic addition to a tune, I’ll whip out my phone & scat sing in the additions I’m hearing in my head. When the project is nearing completion, it’s then I start dropping in Beta Monkey fills & crash accents. Now is when the drumming begins to add to the total arrangement of the nearly final composition. Having single hit samples, cymbal builds, snare shots & a whole arsenal of cool fills is how the track eventually has a live drummer feel. Some composers, when adding a drum track, don’t pay attention to fills etc. & to be honest, no live drummer would ever do a gig without adding a fill somewhere!

Drum machines have probably contributed to the demise of fills / embellishments in modern music, but for me, it’s an incredibly important part of leading into bridges, choruses, solos, intros, outros & making the track feel live & full of personality”.

https://soundcloud.com/simon-reich/oscillator On this track, the early drum sounds are actually a thin sounding drum machine, but that then contrasts with the brilliant funk loops from BM. This features the fantastic bass playing of “Stringburner” from Germany.

https://soundcloud.com/simon-reich/nomad-ft-gavin-mcgough The ride cymbal & great drum fills are a huge part of the sound on this track. It features the lead work of a brilliant guitarist from the UK called Gavin McGough. I supplied all the rythmn guitar, some lead guitar & all the rest of the instruments, including the mighty Hammond B3 organ.

https://soundcloud.com/simon-reich/klavier The fluidity of the drum loop really contributed to the success of how this track formed. I played all the instruments on this tune. Klavier is the German word for piano, which is how I imagined this tune would go, but build into quite a few guitars fighting for attention.

https://soundcloud.com/simon-reich/darkening-clouds A Prog rock tune that is one of my favourites. When the drums & bass kick in, you know it’s going to be a great ride. In fact, that’s probably a tip I would give aspiring muso’s. If you’ve got a solid loud drums & bass, then your track is going to sound really tough. If the bass is up in the mix & has a punchy tone, you’re onto a winner. This track also feature loops from all over the BM Drum Werks catalogue. It also shows how electronic instruments can be combined with live feeling drums but compliment each other. You may be hard pressed to find out how many different loops were used in this tune, but at no stage do you feel it’s not the same drummer playing the whole lot.

https://soundcloud.com/simon-reich/brown-music A rocky tune, that makes use of lots of cymbals & crisp tight drumming. I pulled out the harmonica for this one, but then used all the usual suspects, piano, Hammond B3 organ, Fender Stratocaster. I really loved using the cross stick drum loop as an outro at the end.

https://soundcloud.com/simon-reich/why This tune features a fantastic guitarist from Australia. I love jamming with this guy, who happens to called Simon as well. He originally recorded it as a solo piece & I went through & did all the orchestration around it. When it ramps up to a fully blown rock track 1/2 way in, the Beta Monkey drums loops come out to play!! From a beautiful contemplative guitar track, to a rock number that would have you waving your cigarette lighter in the air. Once again strong loud drums & punchy bass give this track what it needed.

https://soundcloud.com/simon-reich/fresh-air Here is an acoustic guitar track with a real swagger to, thanks to a great live feeling drum loop. It shows how chopping up the loop can customise it to the way the track is going. You’re never trapped in the loops you choose, you can control how they fit into your tune.I played all the instruments on this one.