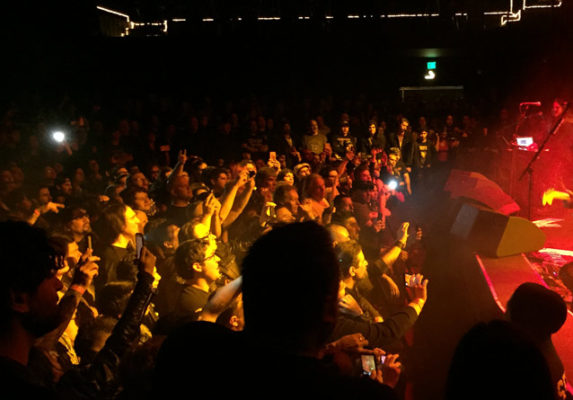 Rock drumming means different things to different people. For some, it’s all about high-energy and power. For others, however, it’s more about a deep pocket and play-for-the-song mentality.

While the rock genre is vast (just think of all the rock genres: classic rock, hard rock, Southern rock, blues-rock, pop rock, alt rock, to name a few!), most musicians would agree that rock drumming is all about three essential elements: big backbeats, big sound, and big attitude.

And, that’s exactly what the rock drum loops from Beta Monkey deliver.

So, no matter how you like your rock drums, you need authentic and usable beats as the foundation of your rock tracks. And, of course, you’ll want a diverse collection of drum fills as well to bring energy and anticipation from one song section to the next. Swung or straight eighth-notes, blistering tempos or half-time ballads, busy or spacious, there’s no feel that’s not the right one when it comes to rock music.If you’re after diverse, versatile, and usable rock drum beats, Beta Monkey has the grooves you’re after.

Here are five essential sample libraries, grouped by how you like to rock, that you should add to your songwriting workflow: 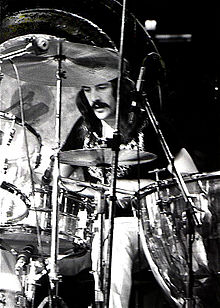 From the first thunderous hits of the intro to “Good Times, Bad Times,” John Bonham put the rock and roll world on notice. On the debut album from British legends Led Zeppelin, Bonzo brought together a style that was all at once funky, swinging, nuanced, and powerful.

But, above all else, his drumming propelled Led Zep with its unmatched musicality and dynamics.

Tasteful or technical, his grooves and fills were the ideal foundation for the rest of the band. His could tear the house down with ferocious attitude and attack, yet his drumming was remarkably restrained and subtle when the song called for it. Need proof? Consider the range in his approach with the flowing swing of “Fool in the Rain” that contrasts with the “Hammer of the Gods” approach he serves up on “Immigrant Song.” Quite a spectrum of rock drumming right there! Ultimately, his drumming throughout Led Zeppelin’s catalog always presented all rock drummers that followed with a template for tasteful, powerful, and, most important, musical drumming.

For these reasons, the iconic grooves of John “Bonzo” Bonham are prominently featured on Drum Werks XVII. But, of course, countless other rock drummers have made their musical marks as well. Some, like Phil Rudd, Alex Van Halen, and Jeff Pocaro, have likewise inspired legions of rock drummers to stay home and woodshed. We’ve done our best to include them all on the sample library Drum Werks XVII.

Drum Werks XVII – This is the rock drum loop library to own if you’re after the time-tested drum tracks of Led Zeppelin, AC/DC, Jimi Hendrix, ZZ Top, Van Halen, and more. An homage to the great signature grooves of the bands that made rock what it is: powerful, unrelenting, and inspiring. 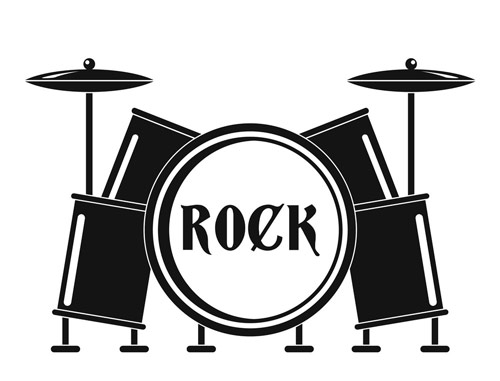 Sometimes the best drummers are the ones that just settle in and do their job. Which is, if you ask most drummers, to keep solid time for the band. No unnecessary fills, no busy beats – just rock-solid time that keeps the whole musical machine moving forward. Of course, a little flash here and there is nice. But, it should never come at the expense of the music.

While never ones to “wow” fellow drummers with their insane chops or shredding abilities, some drummers are still household names for their simple yet beautiful ability to play for the song and stay out of the way (in the best way possible, of course). Charlie Watts, Ringo Starr, Mick Fleetwood — none of them will ever be accused of over-playing and sacrificing the song for their egos. They have an innate gift for playing what’s right and sticking to it.

It’s with that “Keep It Simple, Stupid” approach that we recorded Drum Werks XV. Sure, it has a little flash here and there, but the name of the game was to lay it down with conviction and restraint. The drums are there to support the music, and we’d like to think we achieved that goal with this extensive collection of solid rock grooves and fills.

Drum Werks XV – Because solid, hard-hitting rock drumming is the foundation of all great rock music, we created a powerhouse collection that we recorded out in Los Angeles, the home of some of rock’s biggest acts. With hundred of grooves and fills, these powerful acoustic loops have the finesse and pocket at home in all styles of rock and hard rock. Drum Werks XV is to first of several collections that form the “L.A. Sessions” Series. 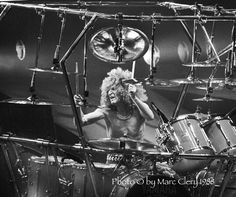 The faster and heavier little brother of classic rock. What John Bonham, Keith Moon, and Bill Ward started is all here in this genre. Massive backbeats, thunderous kick drums, aggressive fills, and uptempo grooves, there’s are just some of the defining characteristics of what many consider “hard rock.”

So, it’s got to be loud. It’s got to be hard-hitting. It’s got to steamroll your ears with unrelenting power and attitude. Anything less and you start going back to classic rock territory. And, while it’s not metal, it’s in the same family. The timeless quality of hard rock drumming, whether you’re talking Sabbath from the late 60s and early 70s or its descendants like Motorhead, Alice in Chains, or Slipknot, is that it is all about unleashing tireless energy and volume upon the audience. Sure, the drums have gotten louder in this digital era of recording, but where would any of that be without the early masters who approached their drumkits with reckless abandon and fury?

With that criteria in mind, we’ve got one that rocks really hard. You simply couldn’t play loud or hard enough to bury the drums on this one! 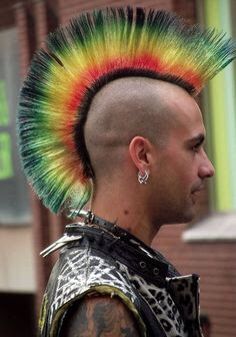 It often gets dismissed as simplistic and easy-to-play, but nothing could be further from the truth. While it’s certainly not going to explore many different time signatures or displace any beats, punk drumming is the faster and less pretentious offshoot of rock drumming. If you think about it, what spawned the whole punk genre in the mid to late 70s anyway? Pompous, over-bearing (at times), and over-indulgent (all the time) prog-rock bands and their 10 to 15-minute opuses that could span any number of time signatures and feels all in succession.

Well, punk rockers were having none of that. Get back to the same patterns that the early rock and roll cats played, except let’s make them faster and louder this go-around. Love it or hate it, punk music left its mark when it arrived on the scene in the seventies with The Ramones and The Sex Pistols and experienced a major resurgence in the mid-nineties with acts like Green Day, Rancid, and Blink-182. Same “don’t give a damn” attitude, same hard-hitting drumming. We had to clear our minds and find that special place where punk rock drumming exists. We’d like to think we found it with Drum Werks X.

Drum Werks X –  Fast. Simple. Hard-hitting. No time for complex drumming or subtle ghost strokes in this library, it’s all about hundreds of slamming beats and furious fills. Non-stop, slamming punk rock drum loops, clocking in from 100 BPM to well over 280 BPM.

Louder, punchier, and more defined. Modern rock owes its DNA to the early masters like Led Zep, Sabbath, et al, but stripped it down some and made it more bombastic physically and sonically. It’s certainly less subtle than early rock (you won’t hear too many six-stroke rolls or paradiddle fills in these tracks), but it still has that rock spirit. Loud, proud, and aggressive.

Sure, it’s a bit more angsty these days, but that’s more on the singers anyways. The drummers of modern rock are still carrying the flag proudly for the men and women who came before them – hit ’em hard and hit ’em often! With that in mind, Drum Werks XXVIII is a good representative of that modern rock approach on the drums.

And, while we said the list would be the top 5 “best drum loops for rock” we have to add one more. It’s the rock collection that got it started for us here at Beta Monkey way back in 2001. So, let’s pay a little respect to the rock loops that got it all started: Drum Werks I

Drum Werks I: If you are looking for drum loops with that big, open, drum sound of Led Zeppelin with inspired “Beats like Bonham” grooves, then these 1100 drum loops will more than satisfy your groove needs. With a powerful rock mix, these drums will deliver the power and warmth you expect from your rock drum tracks. It’s time you get some live classic rock drum loops behind your music with the collection that started it all for Beta Monkey.

Of course, these are just a handful of our most popular rock releases. You can see our full range of rock drum loops and samples at our main rock category page.

7. Cohesive multi-library sample collections, or, which sample libraries can be mixed and matched?

Of all the feedback we received here at Beta Monkey, one has always seems to stand out. And, that is how much customers appreciate having multiple loop libraries that have matching sounds / mixes. In effect, you get a massive range of grooves and tempos found across multiple releases, all capable of being blended with one another.

How do we accomplish this? It’s simple. We book several days in carefully-selected drum rooms. This way, we’re able to keep the same mix, same kit, and same studio sound while exploring many different types of rhythms and tempos.

Because you can add a collection or two as you need them, you can build your own mega sample library. You can do this at your own pace or as your songwriting needs demand. With that in mind, here are some of the rock sessions that we’ve recorded and produced over the years that ended up as sample libraries in their final form: