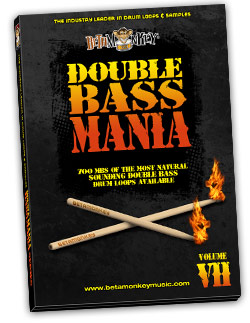 The Double Bass Mania Series of heavy metal drum loops and samples remains one of the best-selling series in the Beta Monkey arsenal for many reasons, but perhaps none greater than the fact that it delivers metal as it should be: heavy, hard, fast, and aggressive.

For the latest installment in the series, we went out and captured some really modern sounds and playing. We had done a lot of traditional heavy metal and thrash, but felt it was time to capture the latest sounds and playing styles we are all hearing in metal. The mix is incredibly punchy and full of attack. And, the playing shows much greater emphasis on syncopated double bass patterns rather than the usual runs of straight 16ths or sixteenth-note triplets. All in all, it truly reflects the drumming you’re hearing on modern metal album releases. So, if you’re into metal from the last ten years or so, then this is the metal drumming you’ve been after.

Recorded and mixed by one of metal’s leading producers/engineers, Double Bass Mania VII has the modern metal drum sound locked in. Deep and punchy toms, crisp and cutting snares, dark and shimmering cymbals, powerful and controlled kicks – all the separation of drum sounds you need to pull off modern metal are baked in the mix.

Drag and drop the loops into the DAW of your choice and you are on your way to writing new metal today. Modern metal drumming attack, power, tone, technique, and feel – it’s all here.

Brutal modern metal grooves, with unrelenting and undeniable heaviness, are only the beginning. You also get over 250 MB of the same drums and cymbals used in the Bay Area Metal Sessions as individual samples. Use these to customize our loops or develop you own in the drum virtual instrument of your choice.

Get your metal drum loops now. The Beast has returned!