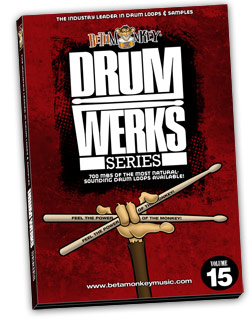 Essential rock grooves to give your drum loop library what it really needs: no-nonsense, hard-hitting, rock drumming. From powerful slow grooves to aggressive up-tempo beats, the L.A. Rock Essentials Series (Drum Werks XV, XVI, and and the upcoming XVII) provides a versatile arsenal of classic and contemporary rock grooves ready to steamroll your next rock song or project.

Recorded in one of Los Angeles’ finest drum rooms with a seasoned pro behind the skins, we wanted to create a no-nonsense rock-solid collection of grooves for rock. No busy patterns, no off the wall fills, no over-playing. Just straight-forward rock grooves that serve beautifully as the foundation for any rock-based song.

The sounds throughout the three L.A. Rock Essentials Series discs (Drum Werks XV, XVI, and XVII) were captured in a single session for ultimate flexibility – all grooves and fills are coming from the same kit and room and allow users to mix and match during the songwriting process.

Although each disc can be purchased and used independently, it is HIGHLY recommended that the three be consider together. Think of each disc as a third of a monster session of grooves, with each complementing the other. The focus on tempo groupings is pretty exhaustive, with many variations of essential rock grooves, both in terms of rhythmic figures as well as leading time-keeping voice (closed hihats, open hits, ride, washy crash/ride, and EFX china cymbals).

You want the ultimate in live drum tracks?

Unlike the modern trend of quantizing the life out of grooves through the use of beat-detective, we brought in a seasoned pro whose time is impeccable. Tasty human feel is all over these discs – creating a pocket that is undeniably human and alive. Careful hand-editing was applied to starts and endings of loops to get the desired tempo, but there is no time-manipulation whatsoever across these three discs. The decision was made that we would capture the true live feel of a drummer who has played on literally hundreds of commercial releases. To suck the life out of that experience, taste, and feel by applying some sort of time correction (be it Beat Detective, Elastic Audio, Flextime or anything of the sort) would be out of the question.

So, if you want lifeless, quantized grooves that have beat-detective stamped all over them, this is not what these sample libraries are about. But, if are looking to get the feel and power of all the must-have grooves of classic and contemporary rock, then we are extremely confident that the L.A. Rock Essentials Series will deliver the goods.

A powerful collection of rock drum loops waiting to lay the foundation for your next project. Complete groove folders include grooves, groove variations, fills, single shots, and single hit samples.